The Creator's sexual design and the power of The Charleston

"Although the particular inclination of the homosexual person is not a sin, it is a more or less strong tendency ordered toward an intrinsic moral evil; and thus the inclination itself must be seen as an objective disorder. (...) Therefore special concern and pastoral attention 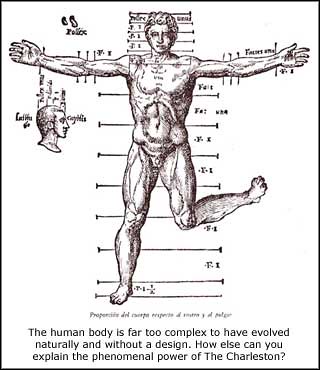 should be directed toward those who have this condition, lest they be led to believe that the living out of this orientation in homosexual activity is a morally acceptable option. It is not. (...) Thus, in Genesis 19:1-11, the deterioration due to sin continues in the story of the men of Sodom. There can be no doubt of the moral judgement made there against homosexual relations. In Leviticus 18:22 and 20:13, in the course of describing the conditions necessary for belonging to the Chosen People, the author excludes from the People of God those who behave in a homosexual fashion. (...) To chose someone of the same sex for one's sexual activity is to annul the rich symbolism and meaning, not to mention the goals, of the Creator's sexual design. Homosexual activity is not a complementary union, able to transmit life; and so it thwarts the call to a life of that form of self-giving which the Gospel says is the essence of Christian living. This does not mean that homosexual persons are not often generous and giving of themselves; but when they engage in homosexual activity they confirm within themselves a disordered sexual inclination which is essentially self-indulgent. As in every moral disorder, homosexual activity prevents one's own fulfillment and happiness by acting contrary to the creative wisdom of God. (...) Nevertheless, increasing numbers of people today, even within the Church, are bringing enormous pressure to bear on the Church to accept the homosexual condition as though it were not disordered and to condone homosexual activity. Those within the Church who argue in this fashion often have close ties with those with similar views outside it. These latter groups are guided by a vision opposed to the truth about the human person, which is fully disclosed in the mystery of Christ. They reflect, even if not entirely consciously, a materialistic ideology which denies the transcendent nature of the human person as well as the supernatural vocation of every individual. (...) 10. It is deplorable that homosexual persons have been and are the object of violent malice in speech or in action. Such treatment deserves condemnation from the Church's pastors wherever it occurs. It reveals a kind of disregard for others which endangers the most fundamental principles of a healthy society. The intrinsic dignity of each person must always be respected in word, in action and in law. But the proper reaction to crimes committed against homosexual persons should not be to claim that the homosexual condition is not disordered. When such a claim is made and when homosexual activity is consequently condoned, or when civil legislation is introduced to protect behavior to which no one has any conceivable right, neither the Church nor society at large should be surprised when other distorted notions and practices gain ground, and irrational and violent reactions increase. (...) Christians who are homosexual are called, as all of us are, to a chaste life. As they dedicate their lives to understanding the nature of God's personal call to them, they will be able to celebrate the Sacrament of Penance more faithfully and receive the Lord's grace so freely offered there in order to convert their lives more fully to his Way. (...) 15. We encourage the Bishops, then, to provide pastoral care in full accord with the teaching of the Church for homosexual persons of their dioceses. No authentic pastoral programme will include organizations in which homosexual persons associate with each other without clearly stating that homosexual activity is immoral. A truly pastoral approach will appreciate the need for homosexual persons to avoid the near occasions of sin. [Joseph Cardinal Ratzinger, 1 October 1986]